ASIA MINING: MINING IN THE PHILIPPINES


In recent months there were a number of statements of the country’s officials regarding the future of mining projects in the Philippines. Today a newspaper cited an official of the Mines and Geosciences Bureau that “Junior companies, contractors, suppliers and financiers from Australia, China, Korea and Japan have been visiting the country seeking investment leads”. In particular he mentioned the delegations from Japan and Australia.
Indeed, the Japan Mining Engineering Centre produced a 32-page research paper “The Investigation Report Related to Mining Field in the Philippines” that among other things stated that the Philippines ranked first among surveyed firms as to the “high potential” of the country in mineral deposits. Indonesia was second, followed by Myanmar, Vietnam and Laos and Cambodia.
Even the Wall Street Journal commented on mining in the country on February 13th and showed this picture 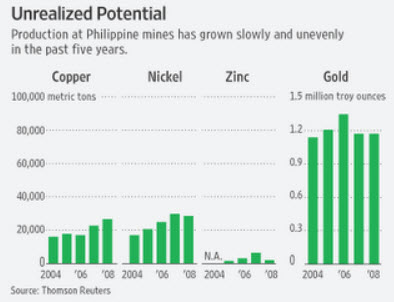 Well, the country risks are well known and many of these were spelled in ‘Mining in the Philippines - Concerns and Conflicts’ back in 2006. Probably some changes are present now?
Anyways, I find the Philippine Mining Investment Portal as one of the best among the countries in the area – it shows all mining opportunities and options – however, it needs to be updated on many pages. Per government estimates, mining  investments have potential to reach more than $1 billion.
Who knows, maybe we’ll see another Australia-type inflow of investors???
Posted by Vladimir Kuznetsov at 10:07 PM