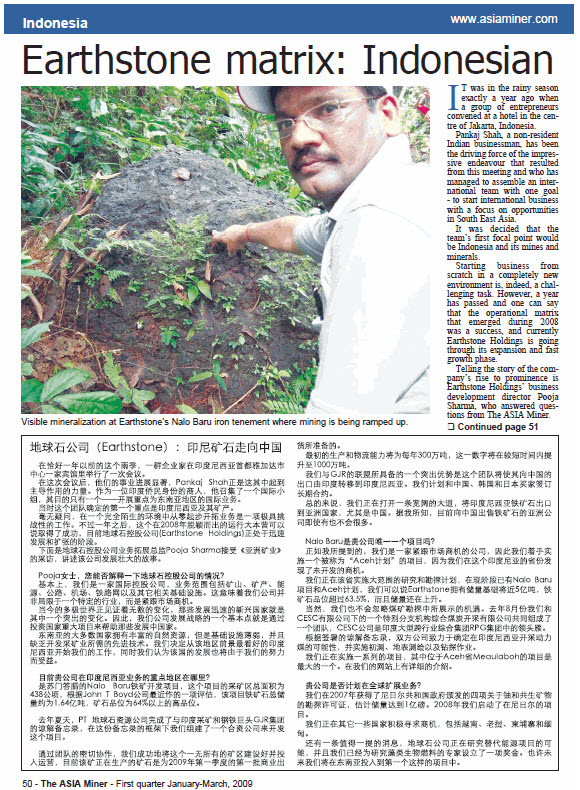 IT was in the rainy season exactly a year ago when a group of entrepreneurs convened at a hotel in the centre of Jakarta, Indonesia. Pankaj Shah, a non-resident Indian businessman, has been the driving force of the impressive endeavour that resulted from this meeting and who has managed to assemble an international team with one goal - to start international business with a focus on opportunities in South East Asia.
It was decided that the team’s first focal point would be Indonesia and its mines and minerals. Starting business from scratch in a completely new environment is, indeed, a challenging task. However, a year has passed and one can say that the operational matrix that emerged during 2008 was a success, and currently Earthstone Holdings is going through its expansion and fast growth phase. Telling the story of the company’s rise to prominence is Earthstone Holdings’ business development director Pooja Sharma, who answered questions from The ASIA Miner.
Ms Pooja can you please explain what is Earthstone?
Basically, we are an international holding that has interests in mines and minerals, energy, roads, airports, ports, rail networks and other allied infrastructure. This means that we are not narrow-focused to a specific industry but rather an opportunity-driven enterprise. The current multi-polar world is witnessing a lot of changes and a prominent one among them is the emergence of new fast developing nations. Thus, one of the keystones of our corporate strategy is to help these developing nations by way of investing in projects of national significance.
The majority of countries in South East Asia have abundant natural resources but poor infrastructure and a lack of advanced technology to develop mining. We decided to start with one of the most promising countries in the region, Indonesia, and we feel that our efforts will benefit its development.
What is the key area in the company’s Indonesian operations at this time?
It is the Nalo Baru iron ore development in Sumatra. This project has a total mining area of 438 hectares and quite recently John T Boyd made an assessment that the total iron ore reserves are about 164 million tonnes of high grade 64+ iron. Last summer PT Earthstone Resources executed an MOU with the GJR Group, India’s leading mining and steel conglomerate, under which we formed a joint venture to develop the project.
Working as a team, we managed to convert this greenfield site into an operational mine that is delivering its first commercial shipment in the first quarter 2009. Initial production and logistics capacity will be 3 million tonnes per annum, which will be increased to 10 million tonnes in the short term.
One of the great advantages of our union with GJR is that the group will shift its current exports to China from Indian mines to Indonesian ones. We are expecting to sign long term contracts with Chinese, Korean and Japanese buyers. In summary, we are opening a wide road for Indonesian iron ore exports to Asian countries and primarily to China. As far as I know, there are not too many, if any, Asian companies that are currently selling iron ore to China.
Is Nalo Baru the only project that you have?
As I mentioned earlier, we are an opportunity-driven organization so we embarked on what we called the ‘Aceh Initiative’ because we see an untapped opportunity in this Indonesian province. We are running an extensive research and exploration program in the province and, at this stage when we count Nalo Baru and Aceh opportunities, we say that Earthstone has a cumulative reserve base of almost 500 million tonnes of high grade 63.5%+ iron ore. Of course, we could not bypass the opportunities presented by coal exploration. Last August we teamed with Integrated Coal Mining Company Limited, which is a special arm of CESC Limited, a flagship company of the RPG Group, one of India’s primary diversified industrial conglomerates. Under the signed MOU both companies are working to identify thermal coal mining opportunities in Indonesia and are doing preliminary surveys, surface mapping and drilling. We are working on a number of projects with the one at Meaulaboh in Aceh being the biggest. This is described in detail at our web-site.
Are you planning to expand operations worldwide?
In 2007 we were granted by the Government of the Republic of Niger four Exploration Permits for uranium and associated elements with estimated reserves of 100 million pounds and 2008 has seen the start of our Niger operations. We are actively looking for opportunities in some other countries: Vietnam, Laos, Cambodia and Myanmar. Another detail worth mentioning is that Earthstone is investigating opportunities in alternative energy projects and we have established a stipend for experts that are working on algae biofuel. Maybe in the future we will be involved in the first project of that kind in South East Asia.
Posted by Vladimir Kuznetsov at 9:44 PM