In this short series of posts, I am attempting to outline one of the most obscured topics – mining industry in Middle East and Near Africa (MENA). While the numbers of countries that are included in this term by many institutions vary – I shall stick to the World Bank definition.

MENA is one of the fastest growing economies in the world: 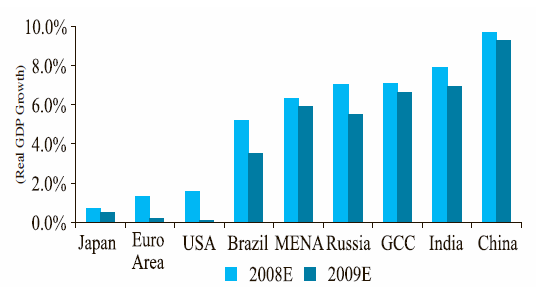 Generally speaking, everyone thinks about MENA region as of the one that has abundant hydrocarbon mineral resources – and this is true. The region is rich in natural resources, but they are unevenly distributed:

And there is one peculiarity: enormous disparity exists between countries rich in resources and countries that are not. Another true fact is – mining sector here is really non-exploited and still has a lot of potential. The governments in the area are striving to diversify their economies, secure more foreign investments – and one of the roads here is to make the most of non-hydrocarbon mineral resources.

Of course, there are many challenges for investors in MENA, as the Deloitte’s Shaping up for 2010 MENA Private Equity Confidence Survey states: “One of the biggest challenges is getting the right valuation at the moment. Also, there is a lack of intermediaries established in the region, so when you approach companies about change they aren’t ready for it. You have to convince companies to take on third-party investors, and as a result, transactions can take a long time.” This graph gives an idea of the issues:
Identified challenges and barriers to growth for the MENA private equity industry to overcome: 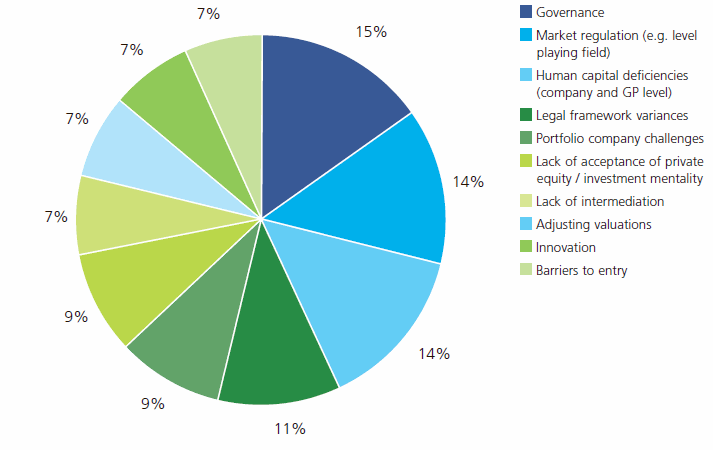 Nevertheless, there are some risks that you may read about in the whole document

You may also watch this video: OECD and MENA countries cooperate for a better business climate
On these general issues of investment, I would like to point you to the following documents:


MENA at this time is not well known for its mining opportunities; however, a lot of effort is being taken to promote them. This is highly visible in the series of shows International Exhibition for Mineral Exploration and Development (MENA-EX) – the next one is planned in January 2010 in Jeddah. As it was mentioned this year at MENA-EX 2009 “Saudi Arabia and the MENA region is the new mining development area…” As it is usual for new mining regions, the infrastructure is one of the biggest problems.
The subject region is very diverse in its investment opportunities – both in terms of resource potential and legal development.  A very brief outlook at specific countries.
Saudi Arabia
There is a strong perception that Saudi Arabia is a major oil producing country, however, in addition to that, it possesses deposits of many minerals, including bauxite, copper, gold, iron, lead, silver, tin and a number of non-metallic minerals. This Web-site provides information on most of them. Excellent overview – Mineral Resource Potential and Its Development in Saudi Arabia by MAHMOUD ALI DARWISH and NAZIR AHMAD BUTT – provides detailed description of the subject with geologic data and maps.
This country is very actively pursuing the issues of foreign investment in its mineral projects.  General idea of Saudi Arabia situation is summarized in this slide from CITADEL RESOURCES presentation: 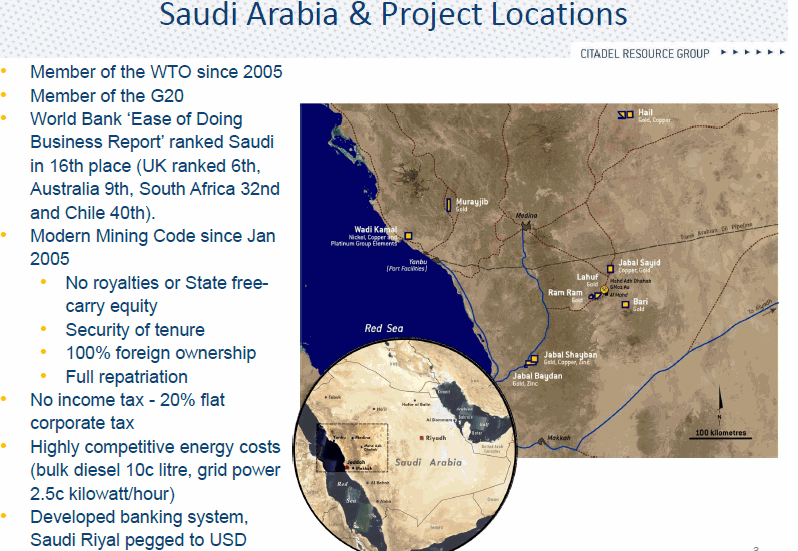 However, the hardest point, as it seems right now – is to actually develop activities with the funds raised.
Ma’aden is a Saudi joint stock company operating since 1997, that is developing five gold mining operations, as well as phosphate, aluminum and other projects. A respectable industry overview may be found in the company’s Prospectus and in this corporate presentation, while a very good description of mining in Saudi Arabia is in the Corporate Brochure. For more than 4 years an Australian CITADEL RESOURCES is operating in the country, and as an example, here is the progress on their copper project

Source: CITADEL Resource Group
Council for Australian‐Arab Relations (CAAR) and Australia Arab Chamber of Commerce and Industry (AACCI) had prepared this excellent  Business Guides to the Arab Gulf The Kingdom of Saudi Arabia – a comprehensive reference book on how to do business in Saudi Arabia: starting from the general issues and entering the market, as well as basic industries. Another Guide on doing business that includes some legal aspects is provided by the Arab-German Chamber of Commerce and Industry.
Other useful links for investments in Saudi Arabia:
MINING INVESTMENT LAW
HOW TO OBTAIN AN INDUSTRIAL LICENCE FOR JOINT VENTURE OPERATIONS
Doing Business in Saudi Arabia by UHY
Foreign Direct Investment in the Middle East: Major Regulatory Restrictions
Negotiating International Business – Saudi Arabia
Saudi Arabia Foreign Investment Law
Saudi Arabia Investment Rules and Instructions
The Executive Rules of Foreign Investment Act
Saudi Arabia Legal Guide
A Brief Overview of the Saudi Arabian Legal System By Dr. Abdullah F. Ansary
Posted by Vladimir Kuznetsov at 10:42 PM