Today’s news carries out this report about the latest events in uranium mining in Niger:
Radioactive spill at AREVA Uranium mine in Niger

"Johannesburg, December 17, 2010 – Greenpeace has today received and verified reports that since December 11th, more than 200,000 litres of radioactive sludge from three cracked waste pools has leaked into the environment at the SOMAIR uranium mine in Niger, operated by French energy company AREVA..." Those interested, may  download the Greenpeace Report:  AREVA’s radioactive legacy in the desert towns of Niger that among other issues discusses the current state of world uranium mining, which is shown on this map from the publication: 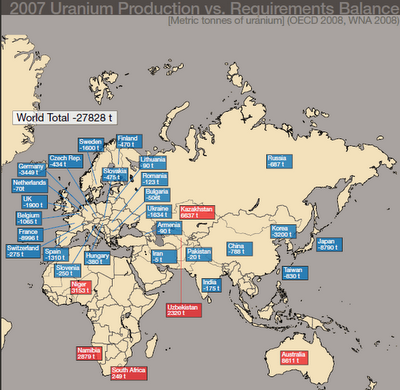 Posted by Vladimir Kuznetsov at 4:07 AM