In pursuit of its operational development plans, Earthstone Holdings has substantially stepped up its activities in Africa, and Zambia is being the key focus.

Dr. Surendra Kumar Sarangi M.Sc., Geology, Ph.D., from Geomin Consultants Pvt Ltd is spearheading Earthstone’s efforts in geologic valuation of opportunities in Zambia. To this end a pilot process was established that is operationally testing the sales and delivery procedures for manganese dioxide.  Our pilot site produces manganese dioxide:


It is initially sorted and then transported in the bags to the storage facility at the town of Mansa:

After sorting and testing at the laboratory at the storage facility the ore is being transported by railway to the port of Dar-Es-Salam for the sales to the customers. Although at this time the described operation has a pilot character (nonetheless, with actual sales), we feel that within a few weeks we will be able to start full-scale sales process. Of course this process is a supplement to regular production, and much is being done in this sense. We are in discussions with a number of local producers, and actually a full-sized roll-up process is under development. We are also in agreement with several mining entities that are willingly delivering their ore for our processing and sales. Current plans call for production level of 20,000 tons of manganese dioxide by the end of 2010.
It is only natural that operations in a new country require a solid logistic support. In just a little bit more than two months the Holdings has set up its Lusaka Headquarters in this beautiful part of the city:

Our facilities include a fully equipped office and comfortable guest houses.

The area around our mining operations in Luapula Province (about 800 kms off Lusaka) – the city of Mansa – shall be the hub of local activities. At this time the local headquarters office is under refurbishment – that, besides logistics facility, shall also include comfortable guesthouses and communications hub. 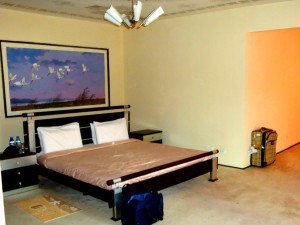 This is only the beginning of our extensive exploration and mining efforts in the country and we will report more in our subsequent posts.

Posted by Vladimir Kuznetsov at 6:20 AM