PricewaterhouseCoopers just released its new report: Mine 2011: The game has changed. This is another source of valuable mining statistics that helps strategic decision making. These documents (this is already the 8th)  “provide a comprehensive analysis of the financial performance and position of the global mining industry as represented by the Top 40 mining companies by market capitalisation.”
Some comments are already available on the Internet:
And many more to come…
I just want to point some noticeable elements:

First, there is a growing confidence among the management of the companies: “the CEOs hold a higher degree of confidence in the future than we have seen in the last few years.”  But there are expectation for volatility.
And some other:

Countinuing my earlier discussion about investing in iron ore producers, here we see a good comparison of commodity process, which comes very handy, if as investor, you are facing a decision – where to invest: 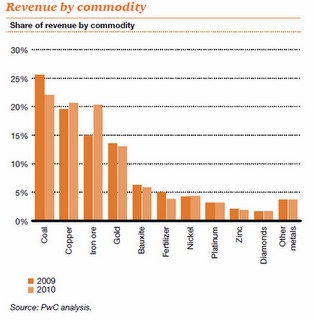 In fact, this goes in line with the ideas that expressed in my previous post
A lot of other valuable information is represented in the report that may be downloaded here.
Posted by Vladimir Kuznetsov at 11:52 PM

Email ThisBlogThis!Share to TwitterShare to FacebookShare to Pinterest
Labels: investing in mining, Investments in iron ore, Mine 2011: The game has changed, PwC