Zinc Mining – is it Worth To Invest?

Zinc Mining – is it Worth To Invest?

“Zinc supply is constrained in the near term by a depletion of large mines and a lack of similarly sized and quality mines ready to replace them. We predict a strong outlook for juniors in the near future, particularly for projects that can be out into production in the years between 2013 and 2020. During this time, we predict that new mine openings will at best keep pace with mine closures, keeping supply flat while demand continues to grow.” This is the summary of a noteworthy document  Global Zinc Drivers by Oreninc – a small U.S. research firm providing independent, relative full-sector coverage of micro-cap equities. The company analysts believe that in the 2012-2016 there would be  “a global renaissance” in zinc mining, and to prove it they provide this graph: 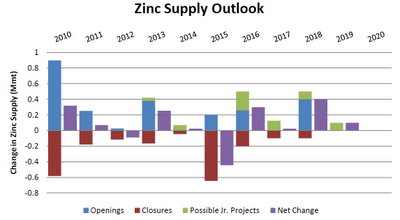 Due to the imminent closures of many of the largest zinc mines in the world, over the next decade the current projects on the drawing board are only going to be able to keep supply relatively flat, not increasing. The red, blue, and green bars show the relative amount of production expected to be gained and lost, and the purple bar shows the net change in zinc supply for that year.
Source: Global Zinc Drivers by Oreninc

Credit Suisse in their note Think zinc! gives a detailed analysis of trends in zinc market: “Overall, zinc could be in a very strong structural demand position in the longer term” – “zinc is a new iron ore” – states the note and gives the following graph 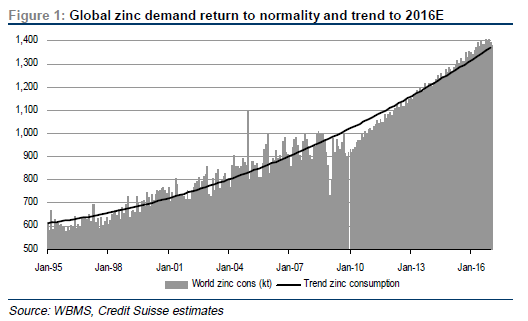 These valuations were made at the beginning of 2010, and initially 2011 supports the data: “The recovery in global demand in 2010 was met by a strong rebound in refined zinc production of 10% as concentrate availability and prices improved. This trend looks set to continue, with gains for both mine and refined production likely over the next few years” – this is statement of a recent post of The Economist’s EIU. However, there would be a moderate growth:
“The zinc price remains above the bottom of its historical range in real terms compared to inventories as weeks of consumption. With inventories high and capacity utilisation below full effective rates, the fundamentals do not justify current price levels. In a surplus market, the marginal cost of production would normally be expected to be a key determinant of prices. Our cost analysis suggests that marginal cost at the 90th percentile of the cash cost curve is roughly $0.65/lb. While we believe sufficient closures to balance the market would likely occur at prices higher than $0.65/lb, the analysis points to downside risk in the near term. We forecast an average price of $0.97/lb in 2010, $0.90/lb in 2011, $0.90/lb in 2012, $1.00/lb in 2013 and $1.30/lb in 2014. Our long-term price forecast is $0.90/lb in 2010 US$.” --- RBC Capital Markets

Over the last months zinc prices plunged – “Indeed, zinc was the only major LME-traded metal to record a price decline in 2010” – notes Reuters. In March 2011 it was the lowest performing metal at LME; and analysts are talking about an oversupplied market. This current situation is examined in detail in Zinc Price Falls on Substantial Surplus, at the same time pointing that “zinc concentrate is in a deficit going forward”.

Understanding the current situation, I still think, that regarding the well-known commodity cycle phenomenon, in the long run investment in zinc production will turn profitable – and the proof of it may be the latest news item: “Minmetals Resources seeks copper, lead, zinc assets as top priority”.

And at the end of my short post, more information for the miners, that are thinking about development of zinc production: AME Mineral Economics provides this interesting table on Zinc Mine costs:
Our Lead & Zinc Mine Production Cost Report covers operational data over a 10- year time span, representing around 85% of Western World zinc output and 82% or world lead production. The multi volume analysis estimates production costs in 25 countries, including many of the major facilities around the world. Cost estimates, covering the production process from concentrate or finished metal are provided 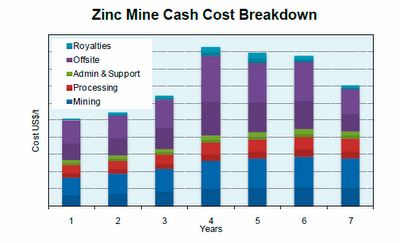 A detailed analysis of specific of zinc and gold mine costs is made in presentation Introduction to Nyrstar Mining.
And a comprehensive source is World Mine Cost Data Exchange that provides mine cost spreadsheet models and operating cost information based on verifiable engineering and production data and peer review by mining industry analysts from around the world. 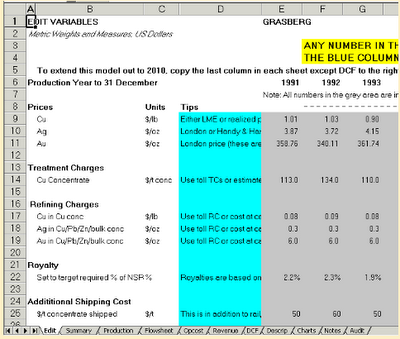 Here are also some useful links:

Posted by Vladimir Kuznetsov at 4:27 AM