The Government of Indonesia has launched one of the most successful economic policies among the Asian countries – this is very true in the realm of the world financial crisis.  Indonesia emerges as one of the leading nations in the world with a very big perspective. This week UBS disclosed IMF (International Monetary Fund) valuation that Indonesia is estimated to become the strongest economy in Southeast Asia region in terms of U.S. dollars currency in the next five years, following China and India. And the new Government is planning to increase and diversify its spending — as it is obvious from the graph (Source: Bank Mandiri) infrastructure benefits from these Government expenditures. 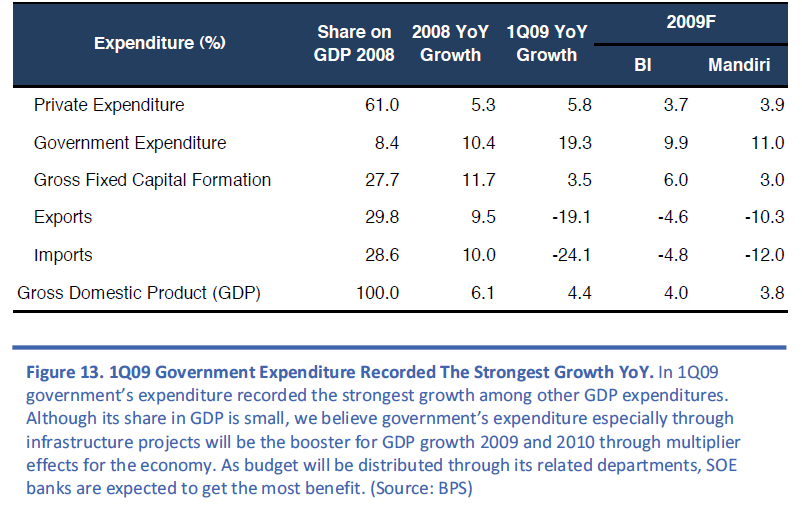 This October the President of Indonesia established a new entity: Presidential Delivery Unit with the goal to accelerate stalled projects, infrastructure included. It is supposed to facilitate talks between investors and the Government. One of the biggest problems, as reported is the lagging in execution of toll roads construction, in particular  1,000 km east-west Java toll road, that  would enable faster transport of goods on the island.
Indonesian Bank Mandiri provides a very good update on all infrastructure projects in their document Indonesian Update . Alongside with mentioned in the previous posts Thesis (Infrastructure Investment in Indonesia: Process and Impact ) this document gives a complete picture as to what is going on now in Infrastructure in Indonesia.
Here is a brief discussion on some infrastructure issues  in Indonesia:
TOLL ROADS
General guidance on the issue is executed by the Indonesia Toll Road Authority (unfortunately, the English version of Web-site is not working well, many links are broken). Here you may find some relevant information: Basic principles of toll road management in Indonesia, Investment Procedures, some updates on current projects, etc.
In 2005, the Government announced plans to build about 1,000 kilometres of toll roads in the country — Trans-Java toll road, being the major part of it. The general picture of toll roads in the country is presented in the CAPITAL STRUCTURE OF INDONESIAN TOLL ROAD INVESTOR :
“The development of toll road investment in Indonesia from the year 1978 until 2008 still slowed down. Before financial crisis, before 1998, the total length of toll road in Indonesia was 532.62 km. At the same time, compared to other nations in East Asian, such as China the total length of toll road was 4,735 km, Philippines was 168 km, Malaysia was 1,127 km, and Thailand was 91 km. So, the total length of Indonesian toll road from 1978 to 2007 was 663.82 km or average growth from 1978 to 1997 was 16.36% per year; and from 1998 to 2007 was 2.26% per year. Compare with China has reached is 45,400 km, Malaysia is 1,574 km, Philippines is 198 km, and Thailand is 107 km.
In investment, the total toll road investment in Indonesia from 1990 through 2006 is US$ 3,335 million, in China US$ 20,045  million, Philippines US$ 1,509 million, Malaysia US$ 7,720 million, and Thailand US$ 782 million. The Government of Indonesia (GoI) has planned to push the growth of toll road investment to reach 1099.08 km in 2009 that divided in Trans Java and Non-Trans Java. But on the contrary, there are many investors interested in toll road investment but only a few succeed to build and operate. “
Very detailed analysis of the situation with major players can be found in PT PEFINDO Credit Rating: Toll Road Industry
In addition, the Mandiri Bank Document (Indonesian Update) gives this representation: 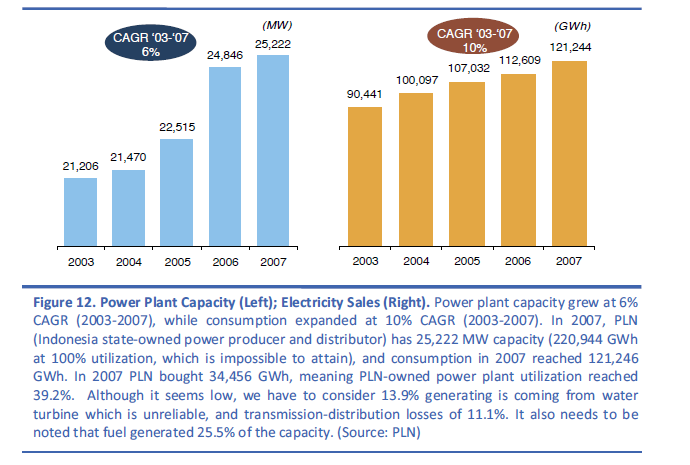 The latest Report: Indonesia Power Report Q4 2009 from Business Monitor International (BMI) notes that the country’s power consumption is expected to increase from an estimated 124TWh in 2008 to 155TWh by the end of 2018: to rise from an estimated 27TWh in 2008 to 44TWh in 2013. Between 2008 and 2018, BMI is forecasting an increase in Indonesian electricity generation of 76.4%,which is among the highest for the Asia Pacific region. An increase of 92.3% in hydro-power use during  2008-2018; thermal power generation is forecast to rise by 74.9%.
To secure Indonesia from electricity crisis attack, through Perpres No. 71/2006 and No. 72/2006, the government started to carry out strategic steps in developing national electricity infrastructure, such as issuing the policy of Acceleration of 10,000 MW PLTU development phase I (Crash Program I), which is expected to be finished in two years time, and the development of Coal PLTU with capacity of 35,000 MW gradually until 2015. (This is reported here). Initially it was estimated that this program was to be completed by 2011, however, at this time only about 25% is realized.
In the mentioned earlier document from Bank Mandiri (Indonesian Update) the electricity problem is illustrated by this graph:

Posted by Vladimir Kuznetsov at 5:06 AM