Indonesia – Mining and Investments with 2014 Update

Emerging markets offer a great opportunity for investors. Indonesia is one of the most prominent countries among this list.  One of the interesting questions, that is prominent now is – after investing in China and India – what countries would be in the top pick by investor community? It seems that for now Indonesia is a solid candidate for this list.

In my recent posts I tried to cover some of the issues:

Recently  I was invited to be a Guest Speaker at the FUTURE MINING 2011 INDONESIA conference in Bali, Indonesia, where I will speak about investors’ attitude towards the country. So in this small post I would like to make some outline of presentation.

The Doing Business 2011 report, released by the International Finance Corporation, ranked Indonesia 121st out of 183 countries in terms of ease of doing business, down six places from last year.  This is general approach, but let us look at the mining business.

Mining activities in Indonesia have a long history which was initiated during Dutch colonial back date to the eighteen century, whereby the Indonesian archipelago was so called “Dutch East Indie’s territory”. Tin mining in Bangka Island and gold mines in Bengkulu and West Java Provinces were opened by the Dutch during those period in 1930 the Dutch Government introduced “Mijn Politie Regleement No. 341″. After the political changeover in 1965/66, the Government of the Republic of Indonesia enacted Law No 11 of 1967 concerning Basic provision on Mining, to replace Law No 37 Prp of 1960 concerning Mining. Subsequent 2009 Mining Law brought a new dimension to mining activities in the country.

In recent years a number of big deals in investments into Indonesian mining as reported:
Last year I have reported in my Blog post Mining Investments - WHERE NOT TO INVEST by Behre Dolbear on the rankings; this year we have a new ranking list. 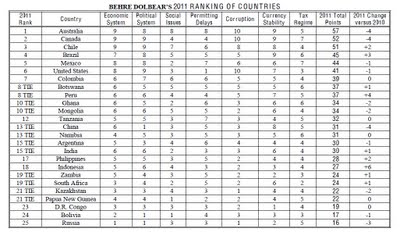 In 2006 Indonesia was ranked 22, this year it is 18. “Indonesia’s composite score rose the most, by 6 points from 21 to 27, reflecting improved economic, mining, and tax policies, management of corruption and the rupiah gaining strength.” - writes Behre Dolbear


I completely agree to the Behre Dolbear methodology, where the following salient parameters are considered when analyzing investor attractiveness:

The new Behere Dolbear document for 2013 is available at this link. So, here is the updated table:

Some observations from the report:

I have also compiled a short summary of the document:

On Indonesia - I would recommend to read the latest post Indonesian Oil and Gas Sector: Legal Framework from SSEK - of the best and leading Indonesian legal firms.

Posted by Vladimir Kuznetsov at 11:46 PM